Scoliosis is defined as an abnormal curvature of the spine---lateral (sideways) and sometimes including rotation. There are 3 forms of scoliosis: Congenital, Neuromuscular and Idiopathic. Overwhelmingly, the most common form is Idiopathic and the type with which most people are familiar. When one has a scoliosis check in school---they are looking for idiopathic, the other types would have been diagnosed much earlier. Idiopathic simply stated means that there is no known cause for the condition. Dispelling some myths, idiopathic scoliosis is not caused by poor posture or heavy backpacks. However, genetics can certainly play a role. Scoliosis curvatures vary in severity and we measure them with degrees, noting to which side the curve is going right or left. For example a classification could be noted as 15 degrees of dextro (right) scoliosis at a certain region. A curvature of the spine must be >10 degrees to be considered scoliosis, below this it is called spinal asymmetry. 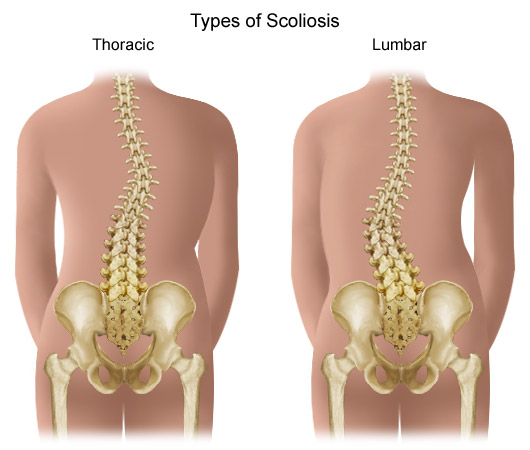 When it comes to scoliosis, females are affected at a higher percentage than males. The curvature occurs in the thoracic (middle back) and lumbar (lower back) regions. The most critical phase of scoliosis is during adolescence, as once a person reaches skeletal maturity, the risk of the curvature increasing essentially stops. This condition is thought to be product of growing, getting taller and the most significant curving occurs during large growth phases. Things to note: If you feel your child has a curvature in their spine or any reason for concern, it is important that you have them evaluated by a medical professional. Early management can prevent a severe curve and numerous medical problems down the road. *Ideas were used from Medscape: Idiopathic Scoliosis and Galaxy on Demand Musculoskeletal module.